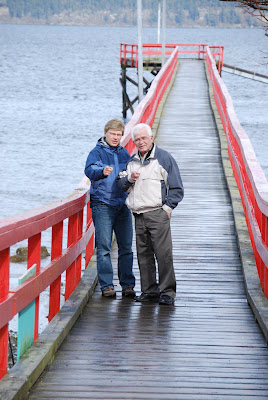 At bed my daughter asked, "Mom why are Opa's eyebrows so long?" (Yes I know, a little random, but it happens around here)
To which I replied, "It's just the way he was made!"
"Well, I told him he should cut them!" she said
"What did he say?" I asked
"That he doesn't want to because he likes them." After a little pause she continued and said "But I think that's good because they can protect his eyes from the sun!"
So funny! Especially if you know my daughter and her Opa.
Posted by Journeying Five at 8:25 PM

So cute!! Let her know it's already been taken care of!!! Oma is a great eyebrow barber.

Hahahahaha, that's great! And I love your new header :)

isn't it funny what kids focus in on...we've got a grandpa with eyebrows that sound like opa's.

What a sweet story!

a friend to knit with said...

My Opa had big eyebrows too (and I inherited them! -- thankfully, I learned how to wax them off at an early age). Kids say the funniest things.