as i picked up boo-boo for a hug, she said
"i'm so glad you're my mommy"
what a little blessing to my heart
how it makes it all worth while
Posted by Journeying Five at 4:48 PM No comments:

well our christmas day was certainly not what any of us expected
boo-boo's sickness kept her up all night
at midnight, bugsy decided to join the party and got terribly sick
somehow papaya slept blissfully unaware of the happenings
as the big cheese and i switched beds, made beds, arranged kids
rinsed out buckets again and again
by morning i felt bleary and weary
and my hands were raw from being washed over and over and over 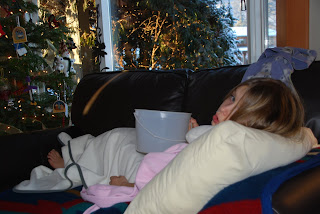 gratefully, our non-sick child is very patient
and put up with the "ill" and simply tired members of her family very well
if it wasn't for papaya, we might have just cancelled presents till the next day
but i just couldn't look at her and do it
the two other sisters rallied, well barely, to the occasion 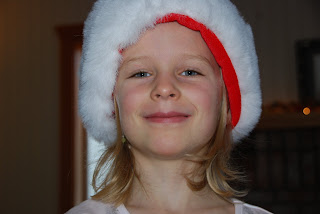 but boo-boo had to interrupt the plans for.....
well, a little break 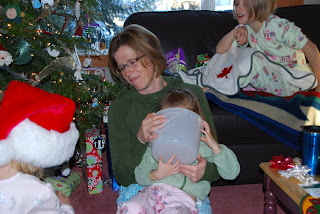 this picture was taken at the end of the morning
you can tell that she was barely hanging on.... 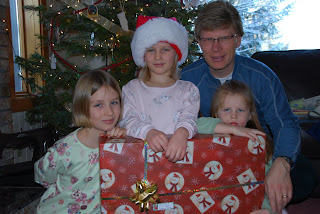 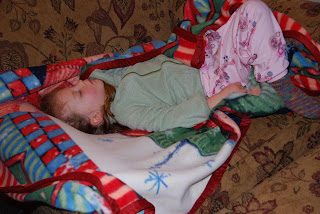 a little later in the day, not wanting to miss the festivities
the big cheese thought he would join along with the girls
and found his place on the couch
so papaya and i snuggled, read books
and assembled the toy from grandma and grandpa 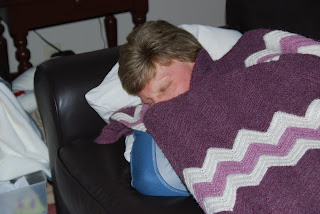 all in all, it wasn't awful
except i felt terrible for boo-boo who had it the worst
took her a few days to recover from it too
so many things to be thankful for though
we were still together and could care for one another
we had food (though not many were eating), shelter and each other
as we look at the gift of the manger, we have a reason to hope and keep on
when i see so many who don't or won't
Posted by Journeying Five at 8:32 PM 1 comment: 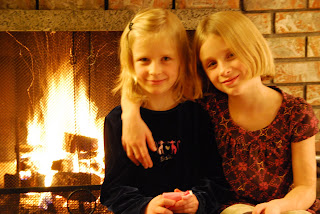 she quickly got sick with the flu
which left her catching bits of sleep in between "the yucky stuff"
her body didn't give her a break from the flu
until at least 7 a.m. on christmas day
even then, she was far from finished 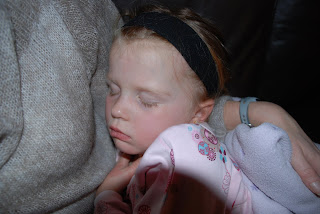 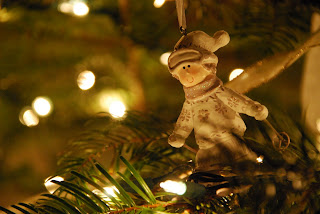 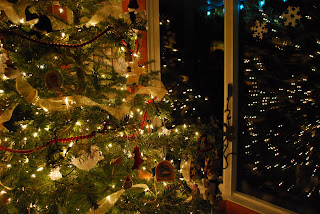 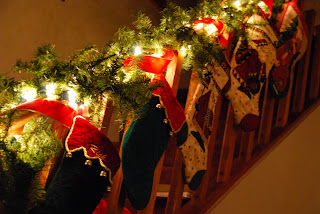 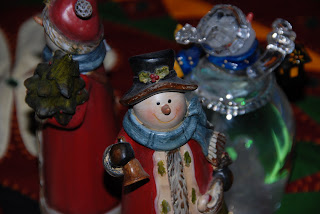 here are pictures from the Christmas concert our church put on
all three girls participated in it
and mommy helped organize it from september to december
it had a great gospel message that Jesus came to earth as a baby
so that we can be in heaven with him
the angels we're aware of God's plan of salvation
and said these words before the last song of the concert:
"we're aware that the wages of sin is death,
but the gift of God is eternal life through Jesus Christ our Lord
we're aware that God sent his son into the world,
not to condemn the world, but that the world through Him might be saved
we're aware that God so loved the world,
that he gave his one and only son,
that whoever believes in him should not die but have everlasting life" 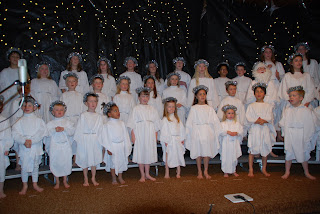 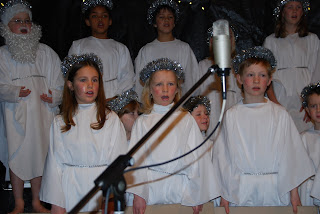 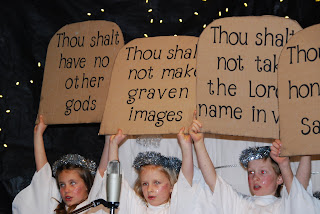 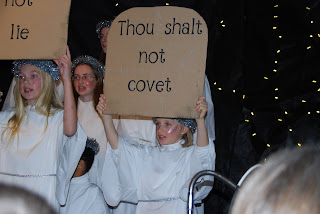 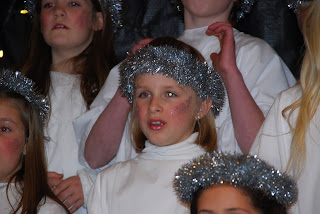 conversation with a 6 year old

papaya asks, "mommy, when i get married will i have to kiss my husband at the wedding?"
mom replies "maybe not, but he might want a kiss after the wedding"
papaya with scrunched up face "eeeeewwww!!"
Posted by Journeying Five at 7:32 PM 1 comment:

i had just sat down at the kitchen table
with bugsy and a friend of hers
we were scrapbooking, LOL because i am not a good one
except maybe in my daughter's eye
however, she is so creative she doesn't take any suggestions anyways
she just likes playing with all the paper, ribbons, etc
and creating her thing...does that sound familar mom?
anyways, like i was saying, i sat down and looked out the front window
the frost was on the tree and the sky was this beautiful shade of blue
and i needed to catch it on picture
before i downloaded the pictures i thought i did a good job,
but realize now that i should have had a tripod
because you can tell i was moving a bit
i wanted to post the pictures though, just to show the contrast
the first picture i turned of the flash and slowed the shutter speed 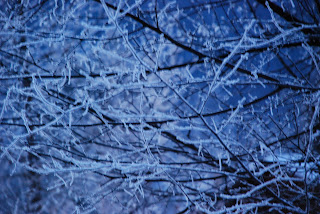 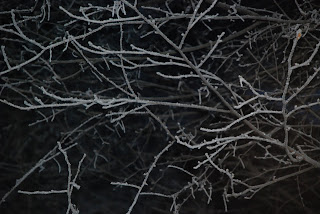 here is our little elf
she loves to be domestic
bake, decorate, craft
she's quiet and gentle
but don't mess with her
because though her fuse is long
her boom can be big
we love her 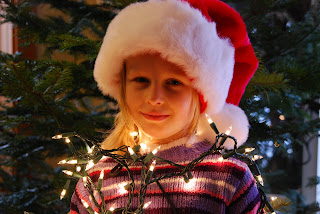 here is boo boo at her open house ballet class 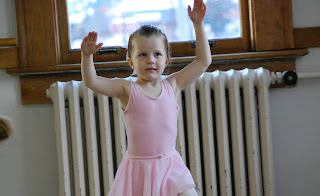 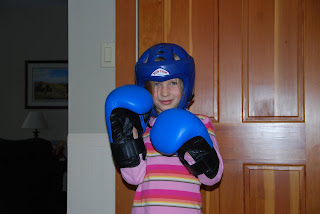 and bugsy putting on the moves,
looks like she might have learned a thing or two from mom
(ie. keep your defense up)
she is certain though that she doesn't want to do martial arts 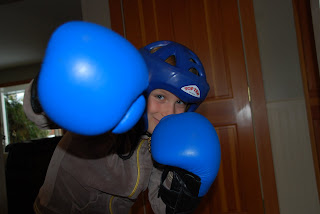 and I am thinking i like kickbo and kickboxing so much,
that i just might have to try karate yet
Posted by Journeying Five at 4:11 PM No comments: 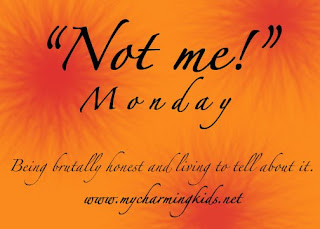 Contrary to what anyone else may tell you
these things most definately did not happen in my house....
because I did not quit Christmas decorating on Saturday
then leave a pile of stockings and trim sitting in my office
and if you looked that pile would not
still be sitting where i did not leave it 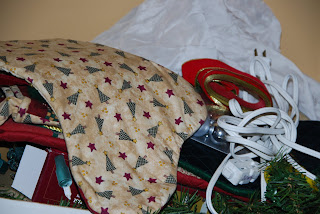 and on the same saturday mentioned above
i did not also leave one, maybe two, or possibly three laundry baskets
full of folded clothes at the bottom of the stairs, that i walked by
but didn't touch all weekend
and i definately did not pick up those baskets on monday morning,
carry them back to the laundry room
and start to fold clothes into them that did not spend the weekend in the dryer 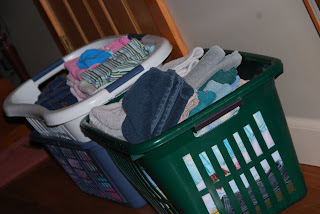 Labels: not me monday

i had nothing to do with it

here is the creation oma and opa made with the girls
i had nothing to do with it
i stood back and watched
they even cleaned up the mess! gotta love that 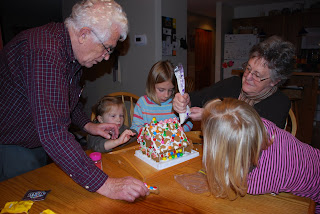 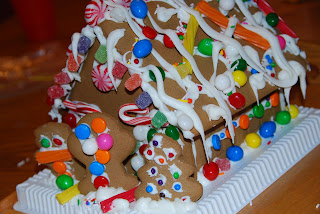 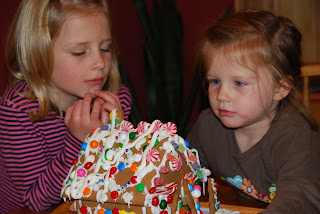 if you get this far into the post, i do wonder....where opa's decorating skills went? did he really retire that long ago? love you dad!
Posted by Journeying Five at 11:11 PM 3 comments:

hubby arrived home safely last night
the girls were absolutely thrilled
he arrived over half an hour late, so the wait was hard on them
he is getting over his cold, but is really tired
he is up helping with the christmas tree and breakfast etc
but then all of a sudden he is curled up in the chair napping
or on the couch resting
he is already talking about the future, the men who went
want to help get the walls up on an a particular orphanage...
maybe go back next year
all thoughts and things to give to the Lord in prayer
right now, we are glad that he is home
safe and sound
Posted by Journeying Five at 12:17 PM 1 comment:

Hi, we are currently waiting for our flight at the Hyderabad airport
Tomorrow morning we will be taking a short tour in London
and then flying into Calgary at around 4:00PM local time on Dec. 4th
I am feeling a bit better after taking antibiotics
My chest and head was very plugged up
I went with our doctor in the group
to get some antibiotics from a medical store and bought some yesterday
It cost about $1.40 to buy it over the counter and in Canada,
the same prescription would be about $50-$60
I am feeling very ready to be home now ...... sorry, the rest is just for this mommy :)
Posted by Journeying Five at 6:27 PM 1 comment: