Only Papaya and I were at home this afternoon. Two of her sisters had a play date and her Dad was off doing some things as well.

Over Christmas she got a Karito doll named Pita. She has been mentioning that she would like a doll quilt for her. I had told her that she would have to learn how to make one. 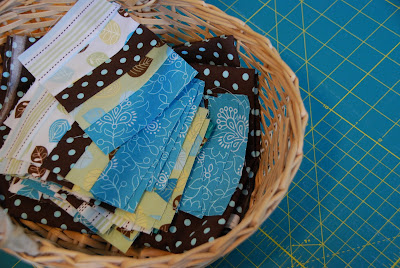 Today seemed like the perfect day. Contrary to the complaints in the southern states, we were too warm today to do much of anything outside. The snow was melting, everything was slushy. So sledding, skiing and skating were pretty much out of the question.

Plus we had a lovely basket of scraps, compliments of a friend (thank you S!) that she had been eyeing for a while. 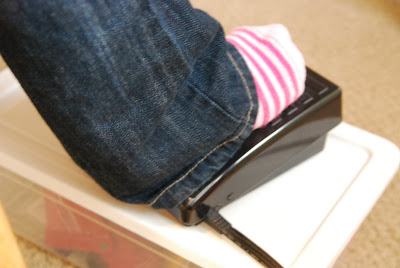 So we got her comfortable, which meant propping up the electronic foot so she could reach it. 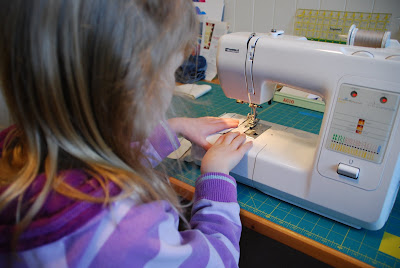 Then we started reviewing the basics. She had sewed a skirt in the summer. But she hadn't done anything since then. At first she felt like things were going really slow. That changed really fast though as she started to get the handle of things. 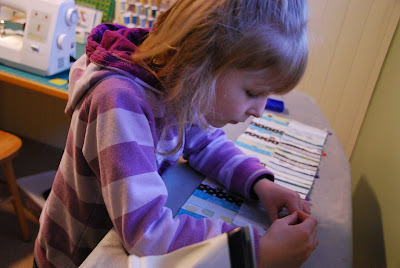 After she knew what she was doing, I really resisted the urge to take over. Okay, if you must know, I kind of "sat on my hands" for a while. Reminding myself it was the process, not how fast it got done. Hadn't I kind of just said that to her? So I decided to get a book and a chair and read. When she had a question, I answered it. When she needed help, I guided instead of doing it myself. 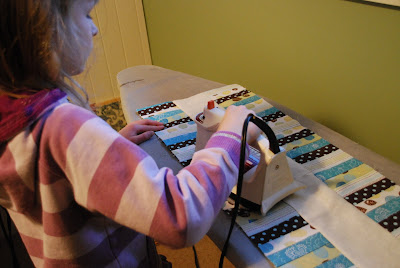 By the "end-ish" of the quilt I went downstairs to help her sister make supper. Doesn't that sound nice? One sewing, one cooking! I was kind of startled by the transitions that are slowly happening in our home.

She did call me upstairs when the thread came out of the needle and she couldn't get it back in. But she was quite content to go it alone. When she said "I can do it Mom", I realized she really wanted and needed to. 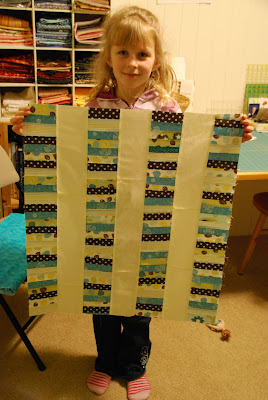 Here she is with her finished doll quilt top. Completed in one lazy, for me maybe, Sunday afternoon.
So proud of her!
P.S. After posting, I realized she held the quilt top with the wrong side to me for the photo. How funny that neither of us realized!
Posted by Journeying Five at 8:52 PM

How fun to have a new helper in your sewing room! The quilt top is beautiful and Papaya did a wonderful job!

What a beautiful quilt! Congrats to her on a job very well done! And congrats to you for teaching!

wrong side or not...it looks great! don't you love it when they can start doing things more independently? you must be a wonderful teacher mom! great job papaya!

What a great day - my 4th grader got a seewing machine for Christmas - and if we can get hat homework on track - we have the fabrics for a fun quilt for her American Girl - I cannot wait - I will be sitting on my hands too:)

She did great....I love just how serious she looks while sewing. You must be proud of your girls -- sewing and cooking. My daughter shows no interest in either pursuit. She may end up starving when she gets her first apartment if she doesn't start spending a little time in the kitchen! (haha).

That is one amazing girl. It is a beautiful quilt. I am so impressed - I made one quilt and I think it will be the LAST quilt :)

that quilt is beautiful! your girl did a great job - i can't wait 'til my girl is old enough to really sew with me.

wow! well done...it's so nice when they take a interest in what you do and give it a go!
where in BC are you from? we are in White Rock.

How funny, not only does it make me ridiculously happy to see my own children sewing, seeing other people's children sewing makes me just as happy! Passing on these skills to the next generation, and such an electronically based generation, is such a wonderful thing. We are off to do the same today, a full day of sewing at Grammy's house!

Fantastic! Isn't is just fantastic when they want to craft with you. The quilt is gorgeous. You must be so proud!

A Spoonful Of Sugar said...

Papaya has done an amazing job!! I love seeing young girls get excited about sewing.