one thing i wanted to do 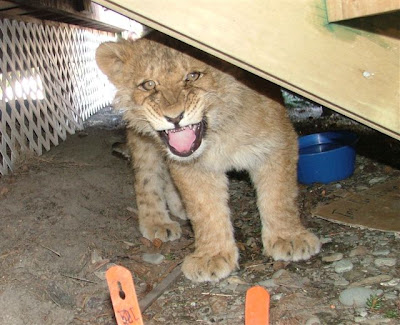 Remember when I got back from holidays I told you about our great friends and our fun adventures? Well here is proof of some of the crazy things we have done. Friends of theirs somehow got ahold of a lion cub and raised it on their farm for a while. It was the most amazing thing ever to see! 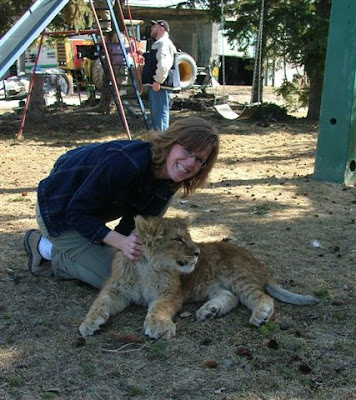 Ever since college I have wanted to hug a lion. In National Geographic I saw a picture of a trainer hugging a lion and it kind tugged inside of me. I hung on to that picture for years. I loved it!
Anyways we finally got to see a lion up close. No fence! No barricade! Wow! It was kind of crazy because even though it was still a cub, you immediately knew it was "King of the Jungle"! This was no pussy cat! It didn't meow. It growled and while it didn't roar, the sounds that came out of it's mouth were wild, not tame and domestic. It's body and legs were muscular and thick and it could have easily taken down our golden retriever if he had been around.
To be honest I was nervous and watching my kids, who were then 7, 5 and 2, like a hawk. And even though it was only a cub, I couldn't quite manage to slide my arms around it's neck and squeeze! 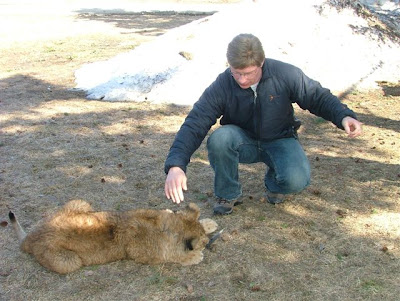 And apparently neither could my husband! 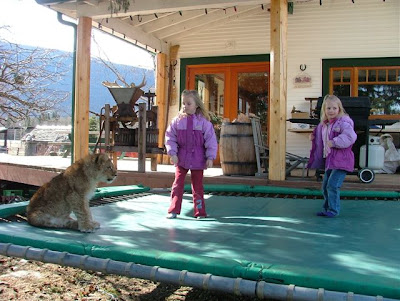 While the girls were on the trampoline, the lion decided to get on too. They weren't 100% sure about this. 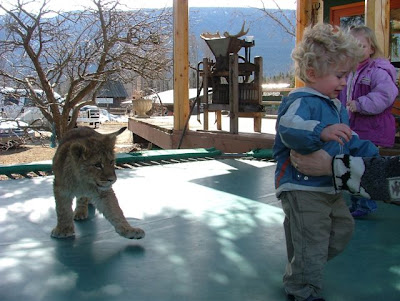 And our friends son was even less convinced, especially when the lion decided to play he wanted to play.

Just thought I would show you it really happened. And for those that are concerned the family did send the lion back to the zoo, where I think it has stayed since.

Posted by Journeying Five at 11:57 PM

What a cute cub. Our friends owned a lion but he was kept caged while we were there. Although I do a have a photo of me reaching through the cage to pet him. Very scary, but awesome! They can be very scary pets you never do know what they are thinking! Glad you had your chance to hug one!!!

I melt!!!
He is just adorable! I like you would love to hug a lion although I'm not sure a big lion would be in the cards for me. What an amazing experience they must have had taking care of it, and an awesome story for you.
Think i'll stick with Molly's big fluffy neck to hug :)

Now that is way cool and your kids will remember that forever. What an amazing experience!

Oh my gosh! But it's great you got to get up close with the lion like you'd always wanted to do!

How adorable, yet scary!

that's too cool..I think I would have been a bit hesitant too! the kids faces on the trampoline just say it all.